Naoussa, Paros, is one of the most famous villages of Cyclades complex. It’s located on the northeastern coast of Paros, in the Gulf of Naoussa. Naoussa of Paros is the second largest village of the island after the capital Parikia, which lies 11 km away. Despite the tourist development of the village, Naoussa has retained its traditional “attitude”. The classic Cycladic architecture of houses, hotels and in general almost all buildings of the village, have made Naoussa the ornament not only of Paros but also of Cyclades.

The center of Naoussa is the port of the village. That is the spot where you will find many cafes, which during the evening hours become bars.  Fish restaurants here, in the past had the important role as fishermen’s warehouses. You can try seafood and fish which are caught the same day during morning hours. The port itself, with large number of sailing boats and fishing boats, is very picturesque and it will definitely be one of the summer memories. By following the paving of the port to the east, you will reach a square. Here you will find the most famous bars of Naoussa. You will enjoy fantastic cocktails in the afternoon. Also, you can find evening club on the main road leading to Marpissa.

When visiting Naoussa of Paros, you should not miss the night tour in the narrow streets of the village. There you will find “hidden” shops that sell jewelry, traditional, and not only, clothing, delicacies and cozy bars and restaurants. Naoussa is located in a very convenient spot for visitors. From the port of the village there are regular “ferry” services by traditional fishing boats specially modify to transport people, every 30 minutes, depending on the destination, to the beautiful beaches located in the bay of Naoussa, such as Kolymbithres, Monastiri, Laggeri and the Aqua Park. Other well known beaches near Naoussa are Santa Maria, Piperi, Xifara, Agioi Anargyri and the beach of Ambelas.
For these places, as for many other in eastern Paros, there are local buses available for transportation.

The first signs of inhabitation of Naoussa, appear during Byzantine period. Then the village was protected by a wall which begins at a small castle, which survives to this day and is one of the attractions of Naoussa. At the highest point of the village, the church Panagia Pantanassa dominates along with other churches built in Byzantine period and accompanies attractions for those interested in religious tourism. In Naoussa you will also find the Folklore Museum of Naoussa and Naoussa Folklore Collection, where you will have the opportunity to admire the traditional costumes and generally take a trip back in time and experience the daily life of Paros past, and Cycladic cemetery.
It is also noteworthy that in the Gulf of Naoussa, near the beach of Kolymbithres, in Koukounaries area, there is the Mycenaean Acropolis, built in 1200 BC.
Surely Naoussa in Paros will be one of the most beautiful seaside villages you have visited. 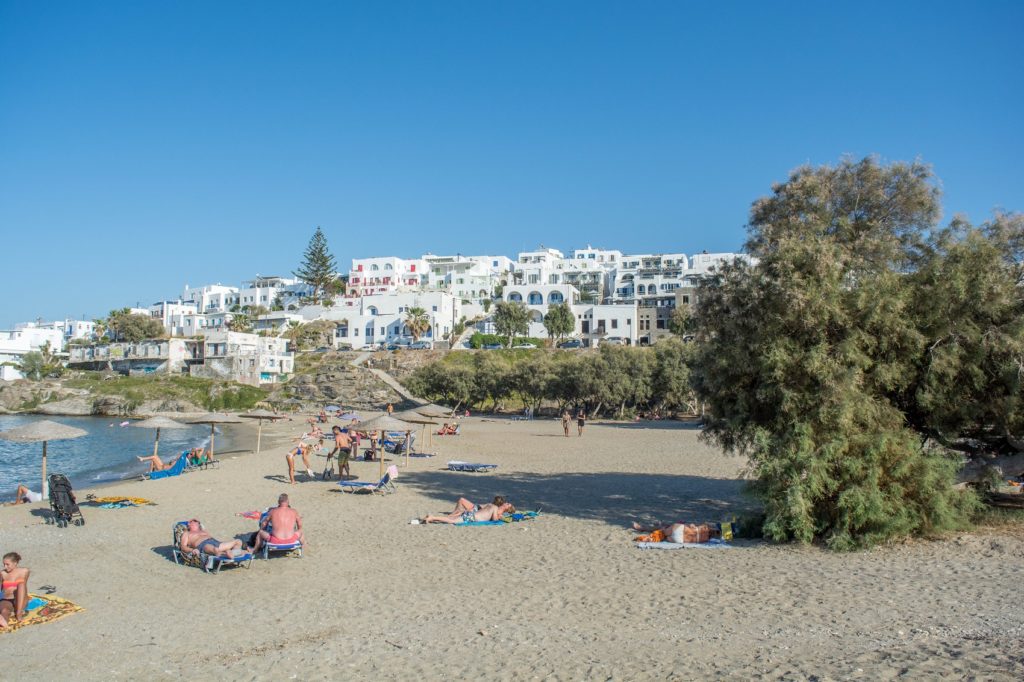 Naoussa Paros features nice beaches within walking distance from the village’s center. But in Naoussa Bay near the village, there are few of the most famous beaches on Paros Island. Check all beaches situated near Naoussa Village.

THINGS TO DO IN NAOUSSA

Naoussa Paros features picturesque alleys and one of the most beautiful locations in Greece. We are referring to our port with many caique boats. This could not be anything less than a romantic place. Thousands of couples and honeymooners visit Naoussa every year. Due to the beauty of our village and its charm, you will enjoy romantic walks with your significant other. We suggest you choose a dusk hour for this unique experience.

Caique ride from Naoussa Paros is one of the most memorable experiences you can do in our village. There are regular schedules departing from our port towards several locations. Those are Kolymbithres beach, Waterpark, Monastiri beach (Paros Park) and Lageri. Caique boats are modified to transfer people and the departure point is right across the small bridge of Naoussa Paros. Therefore, if you are staying in our village, you don’t need a car to reach those beaches. Depending on the season, caique boats depart every 30 min.

Paros is a perfect destination for trekking enthusiast. We would need more than 10K words to describe all the trails on the island and near Naoussa Paros. Therefore, we will suggest a location quite easy reachable. Paros Park is an environmental park situated in Naoussa Bay. You can get there using caique boat (destination Monastiri) from the village. As it features may trails, this is a perfect place to enjoy walk among nature. You can walk towards Korakas lighthouse and you should because the view from there is spectacular! The fact that you can also visit two secluded and beautiful beaches should be an extra motive to visit Paros Park. This location features also the organized Monastiri beach, a theatre and beautiful monastery. On Monastiri you will find a beach bar, sunbeds and umbrellas.

The nightlife in Naoussa Paros is centralized in the picturesque port. This is the place where you will find most of the bars and restaurants. You will enjoy refreshing cocktails or delicious dishes, depending on what you are looking for. Due to the fact that Naoussa Paros is a popular destination, you should know that it might get crowded here. We believe that the best time to be here is during dusk, because of the sunset view. Night clubs in Naoussa Paros are situated on the main road, on which the small bridge is situated. Here you will have the opportunity to have a good time until sunrise.